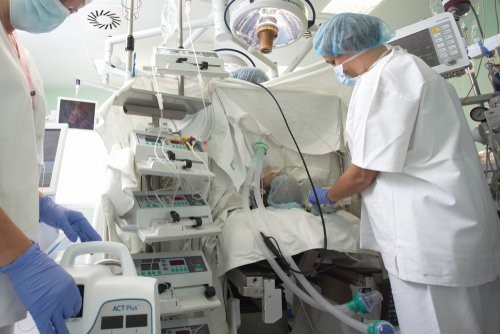 In contrast, new studies by the University Clinic in Zurich suggest that the virus attacks the entire cardiovascular system.

This would explain the repeatedly observed multi-organ failure in severe disease courses.
Covid-19 has been referred to as lung disease time and time again. The lung is undoubtedly the most severely affected organ. But doctors have noticed for some time that many corona patients do not die from lung failure, but from cardiovascular problems or multi-organ failure.
So far, these have mostly been seen as complications of Covid 19-typical severe pneumonia. But a group of pathologists at the University Hospital Zurich led by Professor Zsuzsanna Varga has now noticed that corona patients not only suffer from inflammation of the lungs, but also inflammation of the entire endothelium.

The endothelium is a layer of cells on the inner surface of the blood and lymphatic vessels and is therefore present in the entire cardiovascular system. It acts like a protective shield for the vessels. If this function is disturbed, circulatory disorders in the organs and in the body tissues can occur, which in turn leads to cell death - and thus to the death of the corresponding organs and tissues.

"... we should now describe the clinical picture as Covid endotheliitis"


The scientists around Zsuzsanna Varga have now succeeded in detecting SARS-CoV-2 viruses in the tissue of patients who died of Covid-19 directly in the endothelium. The researchers concluded that the virus does not only attack the host's body as expected via the ACE2 receptors of the lungs - but across the entire endothelium. Wherever the researchers looked: cardiac, brain, lungs, intestinal and kidney vessels were affected, they report in the renowned journal "The Lancet".

"With our investigation, we were able to prove our hypothesis that Covid-19 can affect not only the lungs but the vessels of all organs," said Professor Frank Ruschitzka, director of cardiology at the Zurich clinic and one of the study authors. "Covid is a systemic vascular inflammation, we should now describe the clinical picture as Covid endotheliitis."

This explains the typical clinical picture, which can lead to circulatory disorders in the heart, pulmonary embolism and vascular occlusions in the brain and intestinal tract, which can ultimately lead to fatal multi-organ failure.

The same patients belong to the risk group


Patients suffering from high blood pressure, diabetes, heart failure or coronary artery disease have in common that their endothelial function is restricted.

Therefore, they all still belong to the risk group, because the virus attacks the already weakened endothelial function even further. For the same reason, young patients without previous illnesses experience less frequent severe illnesses.

For Frank Ruschitzka, this means: “We have to inhibit the multiplication of viruses in their most proliferating phase and at the same time protect and stabilize the patient's vascular system. This particularly affects our patients with cardiovascular diseases and a known restricted endothelial function ”.


Intermittent vacuum therapy with the VACUMED device can increase the endothelial functions in humans. The vessels are rhythmically dilated and compressed with alternating negative and positive pressure. This exerts shear forces on the endothelium and stimulates neuronally. Several studies have already shown how vacuum therapy provokes the formation of new vessels (collateral formation) in patients with arteriosclerosis. The release of nitrogen monoxide (NO), which is also formed in the endothelium, has also already been described. So physical therapy becomes a glimmer of hope especially for patients with a previous burden.